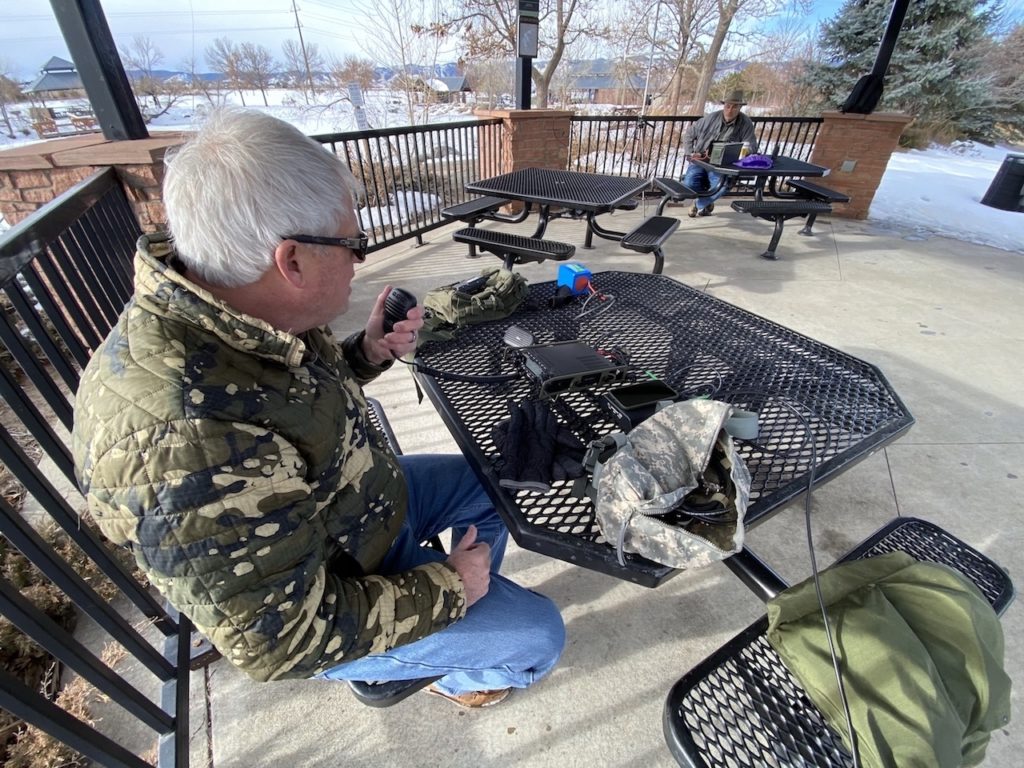 Ashamed to say I completely spaced taking pictures yesterday! A fellow member caught me in the background here though (with AC5S working some DX in the foreground). All told, we had six or so operating stations around the park and about a dozen participants. Temps were cool in the low 30s at 8AM but warmed up nicely through the morning. While the gazebos and plentiful trees made for convenient deployment, the observant ham will notice the high voltage lines in the background. What’s not seen is the five massive AM towers a couple miles away! QRM was the rule of the day, for sure.

I decided to play digital this outing and packed my QRPGuys 40/30/20m DSB Digital Transceiver and an old netbook to work a little QRP FT8. Upon arrival I heaved my half wave end fed antenna over some trees and quickly got to work! I made a couple contacts on 20M right away but as the other operators got set up, I moved over to 30M to avoid their interference.  While I was seeing maybe 1/4 the FT8 decodes on 30 vs 20, I still managed to score another 8 contacts before the band faded around 10AM. I did see plenty of traffic on 40 but by the time I switched the half wave over to 40M, there were plenty of others already working SSB, drowning my little guy out.

Little transceivers like this one usually don’t have terribly sophisticated filtering or band pass circuits and are extremely susceptible to interference. Remember those AM towers I mentioned? Yeah. Even though I’d already modded this transceiver, adding 60 dB Butterworth high-pass pi filters to strip AM radio from its RF modules, I was still hearing the blatherings of talk radio leaking through. It’s a true testament to the FT8 protocol that it happily continued to decode, right through the daily weather and inane sports talk (football is OVER, people).

After a bit, I pulled out and set up my mag loop antenna to see if it could better deal with all the noise around. Magnetic loops can be finicky to tune but their extremely high Q makes them outstanding for rejecting unwanted signals. They’re also less than stellar transmitters (everything’s a tradeoff when it comes to ham antennas) so I typically prefer a dipole or end-fed half wave – especially when working with only 1 or 2 watts. As I hoped, the loop stopped the AM stations cold. I could even point the antenna nulls at other operators and largely neutralize their nearby signals. What was strange however was even though I could hear what sounded like good signals through the netbook speakers, I wasn’t seeing any FT8 decodes. An antenna should be an antenna but I’ve never run this setup before. Clearly some more testing on the bench is needed.

Outside of building & modding my own radio gear, portable ops outings like this are my favorite part of the ham hobby. If your ham club isn’t doing regular POTA or SOTA exercises, get them started! Figuring out what’s optimal for your “go bag” to quickly get on the air anywhere is far more challenging than one would first think. It’s fascinating to see how fellow hams reconcile the ever-competing challenges of radio(s), power, antenna(s), weight, test/troubleshooting equipment, plus don’t forget comfort! No two go bags are the ever the same. Fresh air and a little exercise are just icings on the cake.