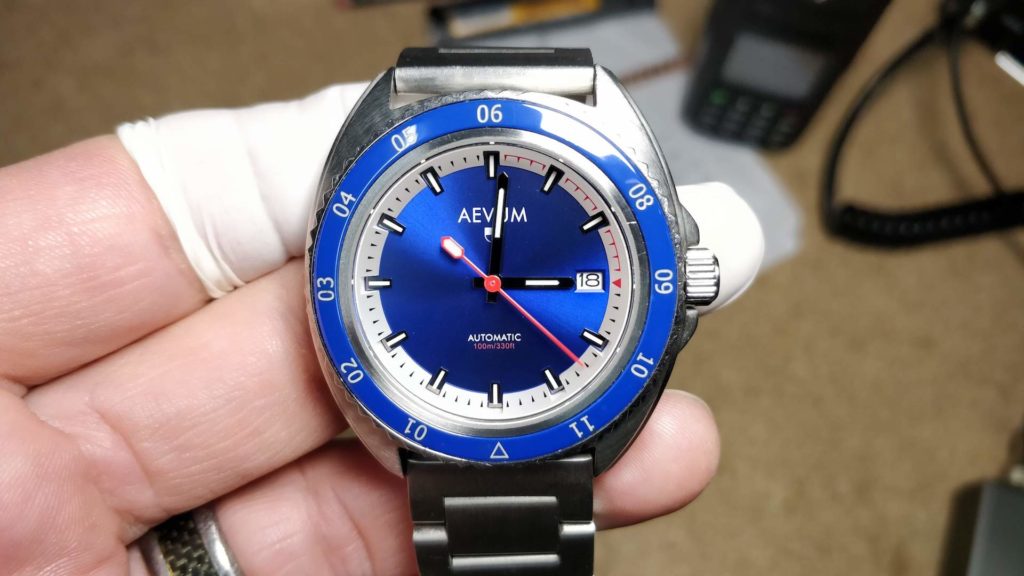 I’m a watch guy. Always have been.

I used to play in the world of ultra-connected watches. Atomic G-Shock, Pebble, Vector Luna, Apple Watch and others, all with sub-millisecond accuracy, day-in, day-out. They all became junk to me however when I got my first “proper” mechanical watch – an Apex GT by Aevum. It’s nothing special, technologically at least. There’s countless boutique watchmakers like Aevum out there, building timepieces around off-the-shelf $30-40 Japanese automatic movements. What initially caught my eye about the Apex GT however was its scarcity. Aevum makes a limited number of a design and they’re done. That’s it. Move on to the next one. Knowing there were only 50 other watches like mine on this planet tickled a part of my brain that could not be denied. This isn’t a sales pitch for Aevum, however. While I won’t protest your digital wanderings to check out their latest design (I’m personally holding out for the upcoming Aevum Track Tech, myself), this rambling is more about a Maker’s beginning adventures down the rabbit hole of wrist-worn mechanical wonders.

Over the past couple years wearing my Apex GT, I began to truly appreciate its well thought out design decisions. The steel case and ceramic bezel have been nigh indestructible. The sapphire crystal is still 100% scratch-free. It’s never leaked a drop through countless pool, hot tub and ocean excursions. Even the stainless band polishes back to a like-new finish in a few minutes on the bench grinder with a buffing wheel. What I thought would be an issue – moving from watches that were never wrong to the vagaries of a device that wanders many seconds a day – turned out totally not so. I became attuned to its temperament. I knew it ran, on average, 15 seconds fast per day. It became my Sunday morning ritual to set my watch one minute behind and I knew it was within a minute of accurate all week long.

About a year into my Apex GT ownership, something happened. Instead of 15 seconds fast per day, it was now running 20 seconds slow. Fast is easy with a hacking movement. Pull the crown, wait for time to “catch up”, screw the crown back down and it’s good to go for another week. Slow is a hassle. Gotta move the hands. Obviously, 20 seconds slow wasn’t going to do so I watched some YouTube vids and convinced myself that this guy could knock this out, no problem. Unscrew the back, give the regulating lever a nudge towards + and Bob’s your uncle! First time I moved the regulating lever what I thought was “20 seconds” worth, I found my watch was now over 2 minutes fast a day. LOL. Clearly, a more delicate touch was required. Attempts 2-4 got me down to +20 seconds. In the ballpark! Then came that fateful 5th adjustment. With dreams of +5 to +10 seconds accuracy on my beloved timepiece, I pointed my fine-point jeweler’s screwdriver towards the regulating lever and BOOM a rogue sneeze hit. When I recovered, I saw said screwdriver deep into the balance hairspring. Game Over. The movement was ruined.

Buying another Apex GT wasn’t an option. Only 50 made, remember? But wait, I’m a Maker! I can fix this! Replacement movement? No problemo. $45 to my door in a few days. But that means I need to get the broken movement out. Remove and reinstall the hands and dial. Don’t new movements need oiling and regulating? Clearly, this project was going to require some new tools. The very best kind of problem to have, as any Maker well knows. Any project worth doing deserves new tools.

Fast forward a couple of weeks and I’m sitting at my workbench, new movement in hand and $350 in new toys, ready for watch surgery. Disassembly was shockingly easy. Hands popped right off the broken movement, dial unmarred (a huge concern). Movement actually came pre-oiled – yaay! I moved the dial over, advanced the new movement to midnight and set the hour hand. Woot! This was too easy. I next placed the minute hand, aligned it in the press and ZING! Uh oh. Where’d it go?

1 hour, 45 minutes of crawling around on the shop floor later and the wayward minute hand finally teleported back from the delta quadrant into our dimension, wedged in a small crack in the concrete floor. 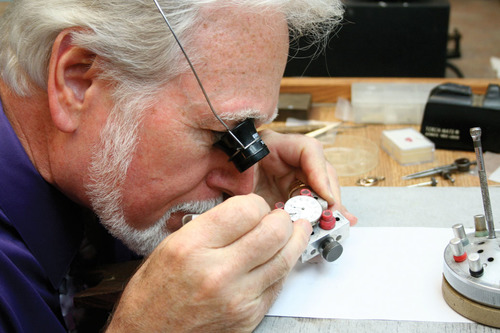 Well, now I know why horologists sit at those crazy-high workbenches, chest firmly against the front edge! I’m so aggravated by this point, I hesitate to proceed. Time for a beer break.

Properly refreshed, I take another shot at mounting the minute hand. No drama this time. Next I look at the rather anemic second hand and have a thought. It’s too short. Never really liked it and now is the perfect time to replace it. So, I cover up my watch repair project with a bowl and head off to the Internet to do some watch second hand shopping, as we all often do. Doesn’t take long to find one I love, but it’s in Poland. $9, shipped doesn’t sound bad but how long will it take to get here? Turns out, 8 weeks.

8 weeks without a watch makes a man do crazy things. I even went to the mall, a place I hadn’t stepped inside in probably six years (WTF? They sell Teslas at the mall now?), to visit the local Rolex dealer…

“Wait, you can’t sell me that Milgauss I saw online?”

“What about an Explorer? Got one of those?”

I began to worry the salesman was going to asphyxiate down there on the floor. Should I call the paramedics? Harumph.

Eventually, the slow boat from Poland arrived in Colorado. My new second hand was glorious…and huge! Uh oh, would it fit? Off to the workshop! Took more than a few tries to get the bugger mounted. Turns out a 0.2mm hole is really, really, really tiny. Finally got it on though, without the teleportation antics of that evil minute hand. Woo hoo! Maybe a millimeter clearance with the chapter ring. Looks incredible. We’re in the home-stretch now. I run the movement through a full 24 hour cycle to make sure the hands are all aligned and the date rolls over correctly. A pet peeve of mine, I cannot stand watches with misaligned hands. Everything looks perfect. I blow out the case with a duster to get any wayward specs out, check for fingerprints on the inside of the crystal, and then proceed to clean dust specs off the dial with Rodico putty. Where has this stuff been all my life?!?! All cased up and stem reinstalled, all that’s left to do is regulation.

(If you’ve made it this far through my rambling adventure here, you must really like watches too…)

I wasn’t about to go through the trial and error approach to regulation that lead to the destruction of the last movement. No Siree, I splurged and got myself a multifunction timegrapher. 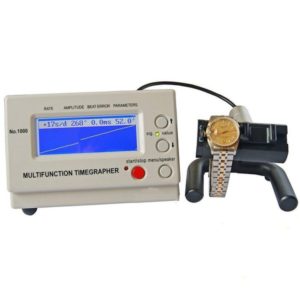 This bad boy listens to the sounds your watch makes and tells you exactly how fast/slow it’s running. Within moments I had my watch running +1 seconds a day – that’s better than a Rolex – take that sales snob! The pic at the top of this post was taken shortly after regulation, watch all buttoned up and ready to wear. Needless to say, I was pretty proud of myself. I wore and gawked incessantly at my rebuilt watch over the next 24 hours aaaaaaand 20 seconds? WTF? It’s running slow? Arrrgh!

Here, boys and girls, is precisely where this old guy learns the difference between watch regulation and watch adjustment. Turns out, these micro-mechanical gadgets on our wrists usually run at different rates depending on orientation. A watch regulated to +1 seconds a day oriented horizontally will very likely not be +1 while running crown up, crown down, etc. If I’d actually spent a little more time playing with my nifty timegrapher, I probably would have discovered this on my own. My “ah ha!” moment, on the other hand, came watching a youtube video of a Rolex on a timegrapher. Any orientation, the watch just kept perfect beat, flawlessly. Turns out those Rolex horologists are rather quite skilled in the black arts of watch adjustment – making a watch run accurately in any orientation. Now I know why they cost so darn much!

My expectations sufficiently reset on my lowly $45 watch movement, a couple other realizations immediately came to me. Now I understood why budget movements come pre-regulated to run fast. When their orientations are averaged out over normal daily wrist motions, it works out somewhat close to accurate timekeeping. Next, it dawned on me why my watch tended to run fast. Whenever I took it off, I laid it flat. What if I kept it crown-up when I wasn’t wearing it? Would that make a difference? Boy, you bet it did! I haven’t set the time on my watch in well over a month and it’s off by a whopping 25 seconds right now.

Can you tell I’ve been bitten by the horology bug? I’m now beginning to make my own watches from parts and pieces all over the world and learning like mad along the way. I’d hazard you’ll probably be able to find me in Ohio this summer taking the AWCI‘s introduction to watchmaking class. I’m annoyed by the limited selection of dials on the open market. If the movement is a watches heart, the dial is clearly its soul. I need to explore making my own. Good lord, do I really need another hobby? I guess so!

That Rolex salesman? He didn’t die. I’m still on the waitlist, or at least so I’m told. A couple years for a Milgauss, maybe more for an Explorer. He says he could probably move me up a bit if I bought the Mrs some nice jewelry. Harumph.