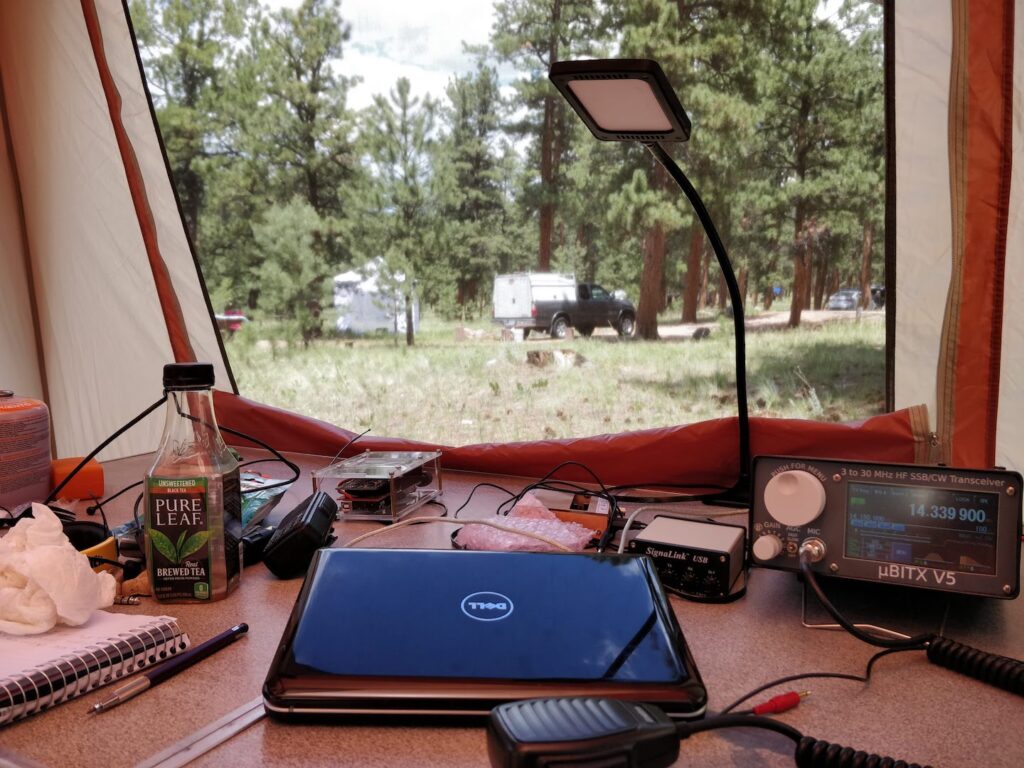 Yup, even a pandemic wasn’t going to stop a bunch of Colorado hams from getting on the air. We had approximately 50 attendees at our usual deployment site – the Colorado Campground outside of Woodland Park, CO. Down a bit from last year, due to COVID-19 concerns no doubt, but many made the same calculus I did and figured while a group gathering wasn’t exactly risk-free, being outdoors largely mitigates it. Plus, it’s pretty easy to social distance while camping. 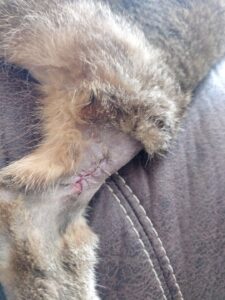 Poor Lilo, home and all sewn up after a long weekend at the vet.

My Field Day wasn’t without its issues though. The evening before I was to head to the mountains, We discovered a nickel-sized gaping hole in the leg of poor Lilo, one of our Pixiebob kitties. I didn’t get home from the ER vet until 2AM and then the fun really started. A pissed 30 lb kitty with a neck as large as her head was having nothing to do with that silly cone of shame the ER doc had put on. We had to babysit her the entire night to keep her from ripping into the uncomfortable packing that had been stuffed and sewn into the wound. Come morning, we were able to haul her to our regular vet, who has boarding facilities where she could be properly monitored and the wound re-dressed daily before finally getting sewn up. A relief for us, but it left me with no sleep and a total packing rush-job to get up to Field Day. My butt was dragging.

Shortly after arriving at camp about 4pm Thursday, fellow club member Randy noticed and took pity on me, helping to get my camp set up. Hams are good folk! Wasn’t too long however before people started asking about the Tacoma-bar… 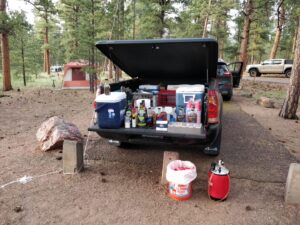 It started last year. I brought up a couple kegs of my homebrewed Extra-Ordinary Bitter beer and a few bottles of harder stuff and left them on the tailgate of my Toyota Tacoma for people to help themselves to. The setup was of course a hit so I simply had to go bigger and better this year – a full self-service bar. Beer (the bitter again), all the essential spirits, mixers, garnishes, the works! The hams were thirsty – it was time to get cracking!

I had made my pop some flavored shines and a cream bourbon for Father’s Day the week before and for the heck of it, brought bottles of each to camp. Someone discovered the bourbon cream about sunset, just as the 1st campfire of Field Day was starting up… The bottle was empty 30 minutes later. Guess they liked it? 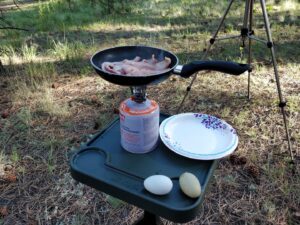 Why does bacon taste so much better when camping?

After a good night’s sleep, Friday brought beautiful skies and the sounds of breakfast cooking all around. There was a lot of work to be done – setting up operating stations, getting antennas shot up into the trees, deploying generators and solar arrays to charge the batteries, for starters. Plus, lots more hams were arriving, getting their own camps set up.

By nightfall Friday, things were pretty well set up. It was time to have some dinner, hit the Tacoma-bar and swap ham lies around the fire. Rain came in hard just before 10pm with a real lightning show. Turning in early wasn’t a bad idea anyway as the big day was ahead! About 2am the rain stopped and coyotes started serenading the campground. It sounded like they were all around. Someone must’ve scored a fresh kill.

By now, if you’re not a ham you’re probably saying “What the heck is this ‘field day’ anyway?” Field day is the annual ‘Superbowl’ of amateur radio enthusiasts. Always the last weekend in June, it’s a contest that’s not really a contest as hams around the nation spend 24 hours off the grid, making as many contacts as possible in that window. Typically a club event, but individual hams also participate. Even more so this year with COVID-19 and some ARRL rule change accommodations for the pandemic.

The contest starts at 1800 UTC on Saturday and runs for 24 or 27 hours (the rules are somewhat complicated). There are numerous ways to earn bonus points – getting kids on the air (GOTA), operating 100% on battery, CW (morse code) and digital contacts earn double, a contact via satelite is worth 100 points, operating low power gets double points, and on and on. Still nobody takes Field Day too seriously – especially the PRA where our motto is: HAVE FUN, PLAY RADIO, AND KEEP THE SQUELCH LOOSE! 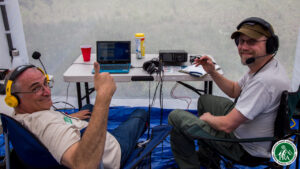 Some wingnut behind the logging computer.

To be honest, contesting isn’t exactly my ham radio cup of tea. The amateur radio hobby is far broader than most people realize – it’s a lot more than old guys ragchewing afternoons away on HF. I tend to focus my ham efforts more on hardware – building and playing with radios, circuits, and antennas. Still, I had a personal goal of spending some significant time “in the saddle” this Field Day. To that end I bought and brought my own Heil headset – while the shared club gear was wiped down between operators, sharing that was a bit beyond my personal COVID comfort level.

My first shift was 90 minutes around 2pm. I took the logging role (entering contacts into the logging computer) while Cameron’s 11-year old kid, who had just caught the ham radio bug bad over at the GOTA station, took the seat behind the mic. I coached her through the CQ lingo and she caught on in a heartbeat. We were operating 40M, which at that time of day isn’t super active, but she made a good 7 or 8 contacts in 45 minutes. After she’d had enough, we swapped out the operator position and got serious filling the log book. 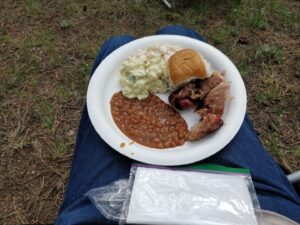 Saturday evening was our club dinner. Usually a potluck, this year the PRA stepped up and provided all the trimmings, served 100% contactless by volunteers. Smart. The pulled pork, slow cooked all day long, was absolutely, positively, delicious. I pulled Ruby (our club mascot) watching duties after dinner while her pappa made a fishing excursion to the nearby lake with his family. I hooked Ruby up with her own BBQ plate. I’m the best human on the planet, apparently. 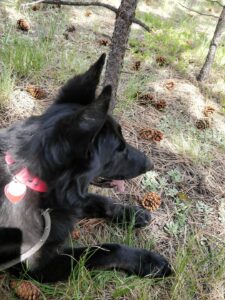 I took a second shift that evening, again working 40M but at the mic this time, from 8 to 10pm. 40M had really opened up and we were logging a contact every minute or two. After a nightcap I turned in for a few hours sleep. Our club’s goal has always been to man the operating stations “around the clock” but it never seems to happen. I’m naturally an early riser so I figured I’d fire things back up at 4am.

To my surprise, Jeremiah was still hard at it on 40M when I woke. He seriously rocked the graveyard shift – solo. Those wussies over on the 20M station? Logbook showed they gave up around midnight 😂. The propane had run out on the tent heater and Jeremiah was freezing. I quickly grabbed a spare tank from my stash and got the heat going again. He hung out for a few minutes logging while warming up and I got settled in, but soon it was off to bed for him – what a rockstar! With the sun starting to rise, I got serious and put a four hour solo session in. It wasn’t as hard as it sounds. While the 40M band was on fire, by this time in the contest, we’d already logged the vast majority of the stations that could hear us and duplicates don’t count so nobody bothers. Still, I managed new contacts every 5-10 minutes and points are points. Jeremiah even reached Japan during the night.

By 8am, others had finished their breakfast and came in to man the stations. I grabbed a bite and started tearing down camp. Fried eggs over pulled pork is epic, by the way. All in all, a Field Day for the ages. We racked up north of 1,200 total contacts and well over 3K points, by the early tallies. The weather was light-years better than last year, where we woke up to snow one morning (yes, it snows in June in Colorado.) I achieved my personal goal, with 7 1/2 hours operating – a wee bit better than the pathetic 90 minutes I did last year. I even hate contesting a little less now. During downtime, I played a good bit with my home-built µBITX QRP transceiver, both on SSB and some FT8 digital. I also got around to getting my half-wave end-fed antenna on the antenna analyzer too. Turns out it’s a pretty darn good performer. 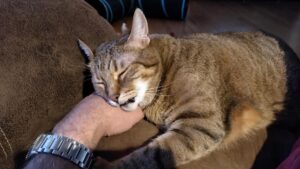 Miss Lilo, who got her stitches out at the vet yesterday, is back to her good ole self. Turns out the whole ordeal was due to a bacterial infection from her annual rabies shot. At least the vet owned up to it and covered the costs. Still took a $600 hit from the ER plus a sleepless night, but it’s good to have the fur-covered turd maker back in full operation so she can torture her brother, Stitch.

Want to see even more PRA Field Day 2020 pictures? Head on over to the club photo gallery!