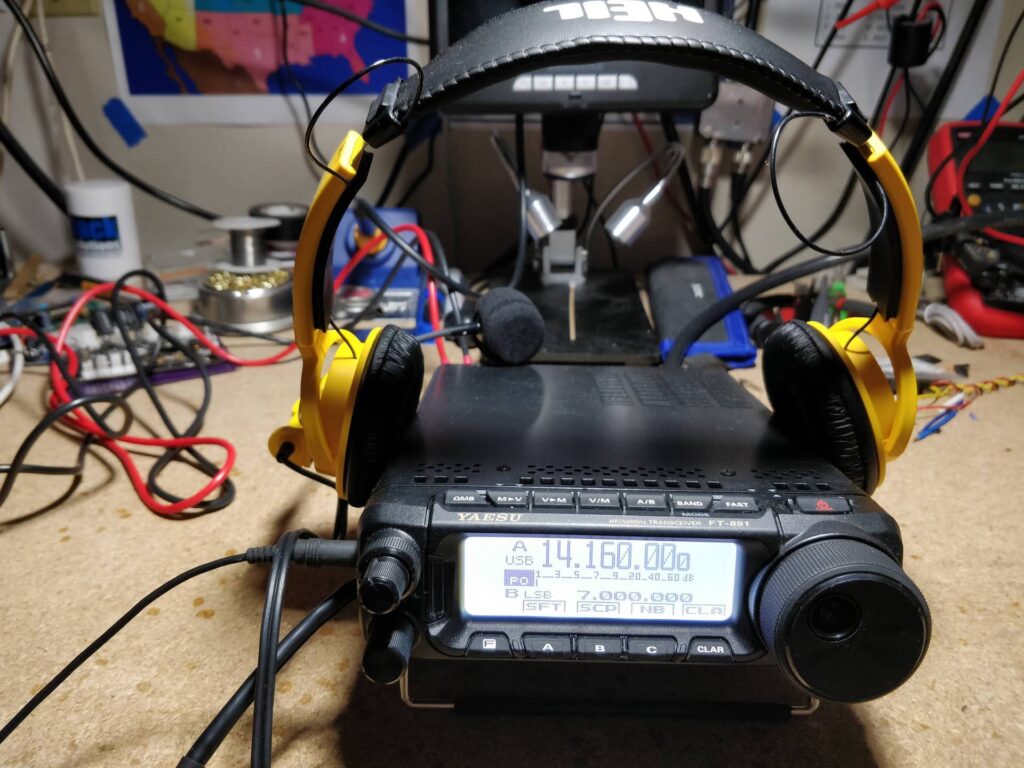 I’d pretty much made up my mind after Field Day to grab one of these. Of course, that’s right about when they became near unobtanium on the usual ham swap sites. I had set myself a deadline of mid-August to have an 891 in my hot little hands so I’d be ready for our club’s big SOTA event on the 22nd. I was just about resigned to hit up the Candy Store and buy new when I finally lucked out and caught a listing for this one nearly the moment it posted to QTH.

After a leisurely passage through our horribly broken US Postal Service, it arrived and I promptly fired it up on the bench. A quick factory reset to clear out the previous owner’s settings and some test transmissions into a dummy load showed the radio appeared in working order. Next I pulled the knobs and disassembled the hand mic for a thorough cleaning. Yeah, I’m weird.

Properly de-cootieized, I set about making some QSOs. First to my buddy Paul, a whopping 5 miles away as the crow flies. Good signal reports both ways. Guess the Yaesu audio defaults are sane. Next I chased the grey line across Europe and had a lovely 40M QSO with gentleman in Croatia. He was booming in 20 over and said I was “9+”. I suspect this was more about him running 1,300 watts with an insane antenna setup but it was nice to know the 891 was getting out on the off-center fed dipole in the yard.

Next order of business was mating the FT-891 up with my Heil headset. Yeah, I could’ve went to the Candy Store and bought the Heil Yaesu adapter but frankly, their headset adapters don’t impress me, plus I pretty much had all the cables I needed in the scrap bins. Just had to pick up a gold-plated 1/8″ mono female for the mic input. Hellooo Amazon! 30 minutes after that order arrived, I had a working adapter; MUCH better quality than Heil’s. 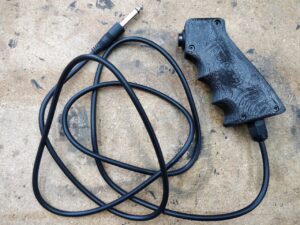 Now I needed a PTT trigger. Heil’s trigger is nice. It’s just not $35 nice, especially when I’ve got a 1/4″ mono cable in the bin and own a 3D printer. I found a suitable grip on Thingiverse (think it was for a nerf gun), modded it to meet my needs in Tinkercad and 3 hours later, it was ready to assemble. Turned out pretty well, I think! I used an arcade-style momentary button which should hold up quite well. 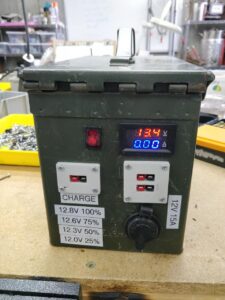 For power, I’ve got a couple of options. With 100W capability, the FT-891 is certainly not a QRP rig, but that’s one of the points that drew me to it – there’s power there when I need it. My 40 AH portable power station I built in an old ammo can is certainly up to the task of running the rig for hours at full output, but it’s also nearly 20 lbs – not something one wants to tote up a mountain. Fellow ham and good friend Brian put an idea in my head when he sent me a link to a fellow using a DEWALT power brick for 12V power. While not terribly cost-effective for a new power solution, I’d standardized on DEWALT for all my cordless tools many years ago and have plenty of the 20V MAX battery packs about. Some quick napkin math showed me I should be able to get 13-14 AH out of a pair of bricks feeding a low-noise buck voltage converter. These battery packs are specifically designed to dump a lot of current fast so while I could get all-day operation out of the FT-891 running  5 or 10 watts, I could certainly “crank it up” to finish a tough QSO when needed.

Back to Tinkercad (I just can’t quit you Tinkercad!) I modeled up a case to mount two DEWALT batteries, hold the electronics and a voltage / amp display. Fit-up was tight – especially with the 14 AWG wiring needed for the amperage. After an appropriate amount of cussing, it all came together though and I’m pleased with the result. Readily outputs the 10A the FT-891 calls for at full power and only weighs 3.3 lbs. Perfect!

Been through the FT-891 manuals a couple times now so I’m pretty comfortable with the features and menus. The DSP and noise reduction options are quite impressive – similar in capability to my Kenwood TS-590S. Looking forward to doing some side-by-side comparisons between the two rigs. One thing the FT-891 doesn’t have is a built-in tuner. I’m actually good with that as I prefer to use tuned antennas in the field and I’ve been considering throwing a remote-mount tuner up on the roof at the OCF dipole feed-point anyway. That’s probably next on the acquisition list, though I’m seriously entertaining the thought of building my own tuner. We’ll see.

Will the TS-590S eventually get the boot from the shack? Man, I don’t know… I love that radio but it does take up increasingly valuable bench space. The FT-891 could be under-shelf mounted alongside my TM-V71A. OTOH, the 590S has integrated audio for PC interfacing. It also has stellar remote-control software. I don’t really need two HF rigs though. Decisions, decisions…