There was the Thanksgiving when the oven heating element (literally) went up in smoke, covering the near-raw turkey in ashes.

Then there was last Independence day, with laundry hampers full, when the washing machine said “Screw it. You’re going commando.”

Oh, and that New Years when the igniter on the furnace went out… Good (if cold) times.

We’ve certainly got a history of appliance revolt when stores are closed for holidays. Why would this Christmas be any different?

I’d taken advantage of the warm Christmas weather this morning to run a 6/3 line for our new spa from the house breaker panel. Panel was getting tight so I had to rework some circuits and consolidate a couple into a tandem to make room for the new 50A feed. All went just fine and I had the power off for maybe an hour. I’d even gone through the house in advance and shut off every computer, Raspberry Pi, the NAS, and even the firewall; all proud of myself of how proactive I was being.

After getting everything buttoned up, I ventured upstairs to grab a victory beer from the fridge and settle in for some Christmas football. Wait, why are the LEDs out on the fridge display? I didn’t mess with any kitchen circuits, but maybe I bumped a breaker. Nope. Grabbed the outlet tester and checked the fridge outlet. It’s good. Sigh…

The fridge, a GE side-by-side, has been a target of our deep hate since it entered our lives a decade ago. It, and the epic shitshow Whirlpool Cabrio washer were both Consumer Reports “top picks” when we bought them. I am now 100% certain that Consumer Reports could not accurately review their own asshole.

We parted ways with the Cabrio earlier this year for a commercial Maytag. Alas, my joke about getting the coin feeder option to recoup costs from the Mrs. didn’t go over too well. I  did tip the delivery guy an extra $20 to insure he take the Cabrio to washer hell, but I digress…

As tempting as it would be to bid adieu to the GE fridge and get a decent one, earliest delivery windows from Lowe’s or Home Depot were mid January. Plus dropping another couple grand after just getting new decks built and a spa, yeah, suboptimal. Oh, and we’d just grocery shopped so of course, the fridge was slam-full. Managing coolers for three weeks? Yeah no. 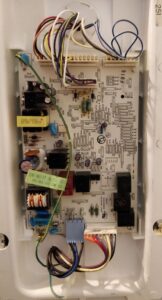 Longshot, but this was clearly an electrical issue – maybe a blown fuse or something. So, I pull the fridge out and commence disassembly. Credit where credit is due, GE made this thing dead-simple. One circuit board, easy to access so I pulled it for closer inspection. $5 says even if you don’t know much about electronics, you’ll see the problem here.

Yeah, there’s a lot of heat-induced discoloration around those resistors in the upper center. It was even worse on the back side. So much so, in fact that the VERY under-sized copper traces to these resistors on the single-sided board had delaminated.  Nothing to lose, I traced the circuit and replaced the cooked traces with proper wire.

Plugged the board back in and… IT LIVES!

While my wallet let out a sigh of relief, I was left gobsmacked at how a “reputable” company like GE could do such a badly designed board. Was this a fluke? I knew my next step was to find a spare board as a spare is 100% insurance the original part will never fail again (ask my oven or furnace how I now know this).

Woah. All the used and “refurb” boards on eBay show the exact same heat stress. Good grief GE, you trying to kill us?

I did manage to find one that looked good; claimed to be a new pull from a shipping-damaged unit. We’ll see once it arrives. I did put a temperature probe on my repaired board after it was running for a good 30 minutes re-cooling and there’s zero heat buildup so I’m optimistic my repair will hold up.

Still, I’m left wondering why it’s so difficult to get decent appliances anymore. This was not a cost-cutting measure. There would have been zero difference in having the proper copper trace size for the current load of those resistors. Same with our Cabrio washer – sooo many poor engineering decisions and you didn’t need a mechanical engineering degree to see them.

And what’s the deal with Consumer Reports? Wouldn’t checking circuit boards for heat be a basic test of an appliance? Did I mention the entire board is all cold solder joints? Is CR’s “best washer pick” really smart with a single, tiny metric bolt holding the motor stator on? And that bleach dispenser directly under the $70 lid hinge that rusts instantly? The woefully under-sized springs on the drum that mean 90% of all wash loads fail with Unbalanced Load errors? Either Consumer Reports hires the world’s worst engineers or they’re filling their bank accounts with “interesting” revenue streams.