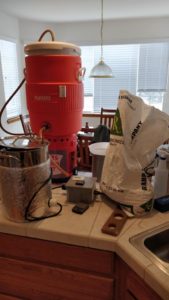 I think this is a first in my nearly 20 years as a homebrewer. I’m out of beer!

Used the last of my Brut IPA keg to beer brine the Christmas turkey (delicious), so it’s time to fire up the gear. On-deck is a new recipe my beer-deprived brain came up with – a brut vanilla black IPA. My addiction to sessionable but VERY dry beers continues unquenched. A couple ml of amyloglucosidase in this simple grain bill should really dry this one out, and I’m thinking just a sliver of vanilla bean into the keg along with the dry hops will be a nice twist.