My first 3D printer was a @Printrbot Jr. An impulse purchase during a Black Friday sale over 7 years ago, it redefined how I thought about Making. An idea in my head could be sitting on the build platform an hour or two later.

The Jr. is long gone, but many of its parts (“vitamins” in Maker nerd-speak) live on in its successors, an Ord Hadron and a Mini Kossel, both scratch built. While the Kossel is lightning quick for small parts, the Hadron is my real workhorse. Its 8x8x8 inch build platform means it’s regularly called upon for projects that take a full day (or more) to run.

As any Maker knows, there’s nothing worse than having an 18 hour print job die 16 hours in due to extruder skipping or a nozzle jam. Fortunately for the trusty Hadron, these were completely unfamiliar concepts for several years of quality production. Until about a month ago, that is. 1st layers started looking messy, the extruder stripped the filament a few times, and one jam was so bad it required a full disassembly of the extruder and hotend. I fiddled with Slic3r settings trying to get things copacetic again but I knew the truth… The 7 year-old Ubis hotend, a hand-me-down from that original Printrbot Jr, was toast.

I’ve been watching the E3D team across the pond with interest over the years. I always knew when the time came to throw some modern “vitamins” at my printers, it was going to be E3D. So, my christmas present to myself this year was their Hemera (aka Hermes) extruder and v6 hotend. 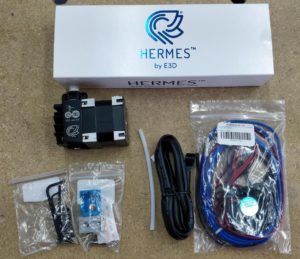 Right out of the box, I was impressed. I wasn’t expecting wiring so complete it even included a custom motor cable harness. Of course, you don’t truly own something unless you take it apart, so 1st order of the day was a full disassembly of the extruder. Very nice. No slop, precision gears, and well thought-out engineering, top to bottom. No corners were skipped in the components either – quality fan, insulated heater core wiring, and even a pre-terminated thermistor that made it plug-and-play.

Actually mounting the Hemera consumed the better part of the afternoon as the Hadron X-carriage required some minor tweaking. The Hemera is so compact, there’s practically no clearance between the extruder and hotend, so I had to mill out a larger pocket on the carriage base to allow sufficient clearance. The Hemera also has no bottom mounting options like my old Printrbot Simple Metal extruder, so while the carriage was on the mill, I also drilled and tapped some holes into the back face for a horizontal mounting. Outside of scrounging appropriate length 5mm spacers from the part bins (not to self: order more spacers!), the rest of the assembly was problem-free and turned out really clean.

As this upgrade involved a new thermistor and much more powerful heater cartridge, code would need to be recompiled. May as well take the opportunity to upgrade to Marlin 2.0. The trusty ole Printrboard (again a Jr. vitamin) is still supported so it only took 30 or so minutes to walk through the Marlin config options, compile, and push the new firmware to the Printrboard.

After a quick run up to 285°C to hot-tighten the nozzle, The Hadron was back in production! Still a lot of calibration and testing ahead to find optimal Slic3r settings but initially, I’m feeling really good about the E3D Hemera.

The Printrbot Jr. would be proud.